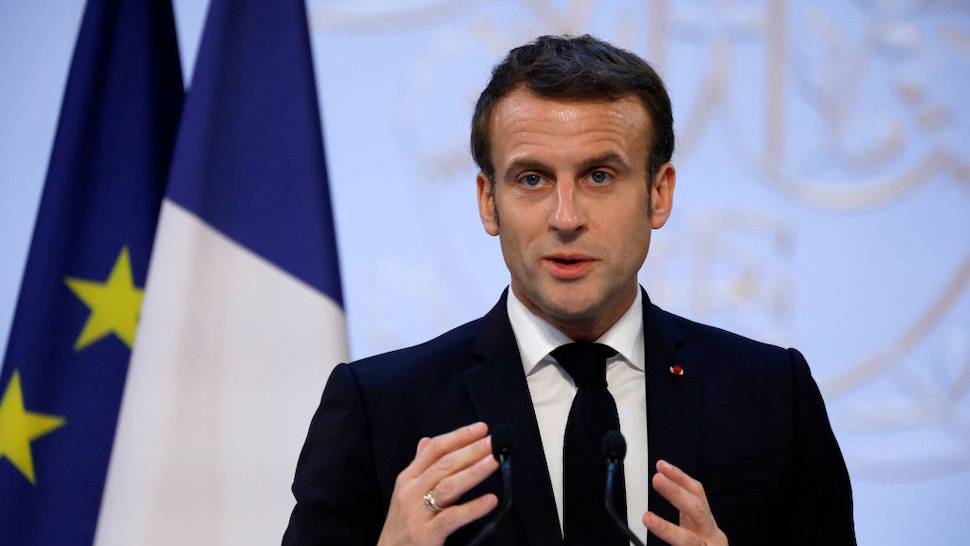 Visiting Jerusaelm for the World Holocaust form, French President Emmanuel Macron used the site of a holy church to yell at the Israeli Police who were protecting him.

This is just another episode of French antagonism to Israel’s presence in Jerusalem. In 2016, France supported a ludicrous UNESCO resolution that implied Jerusalem has no Jewish or Christian historical connection. The French prime minister at the time, Manuel Valls, subsequently expressed regret for his country’s action, but it did not stop France from doing it again: A year later, it abstained on a similar UNESCO resolution.

The following year, when President Trump announced that the United States will recognize Jerusalem as the capital of Israel and move its embassy, France was at the forefront of the passionate and angry European opposition— itself more aggressive than the Palestinian and Arab reactions. Macron repeatedly claimed that the recognition would have negative security repercussions well beyond Jerusalem, stating that “the status of Jerusalem is a question of international security which concerns the entire international community.”

Such European position is based on a 1949 U.N. resolution that designated Jerusalem and Bethlehem as a “corpus separatum” to be placed under an international legal regime — essentially a European colony.

Macron did not stop there, and tried to link the May 2018 Hamas-led “Nakba day” Gaza riots to the opening of the new U.S. embassy: “Experience shows that whether you like it or not, things like that provoke violence in response. … This leads to people dying.” He said.

French disruptive meddling in the Middle East is not new. In 1920, French actions triggered the first shots in what became the Israeli-Palestinian conflict. France invaded Syria in order to dethrone the pro-Zionist Arab Emir Faisal and to instill a French regime instead (nominally posing as a League of Nation mandate). While Jews attempted to stay neutral in the French-Arab conflict, local Arab commanders suspected French soldiers were hiding in the Jewish village of Tel-Chai and a deadly battle ensued.

The residue of French colonialism was very much on display in Macron’s visit to Jerusalem on January 22. Indeed, it traces back as far as the inter-colonialist dealings of the 1850s, when the Ottoman Empire gave the Church of Saint Anne to France as a reward for France’s support in the Crimean War.

“Get out,” Macron yelled at Israeli Police as they entered that church with him. Analysts view this as an orchestrated show directed at Macron’s Muslim and far-left anti-Israel voters. Previous French President Jacques Chirac pulled a similar stunt during his 1996 Jerusalem visit. Walking through the narrow alleys of the Old City — a venue of multiple stabbings and other terrorist attacks — Chirac confronted his Israeli security detail for their tight protection.

What is alarming about the January 22 incident is not that Macron, like Chirac, decided to take a shot at Israel for seemingly internal political grains, but that he chose to do so in one of Christianity’s holy sites, located right on the Via Dolorosa. As Macron ordered Israeli Police out, he yelled at them that those rules have been in place for centuries and “that will not change with me.” Macron got it wrong. This colonialist-era arrangement could have only been in place for one century and a half.

While Macron might wish for Jerusalem and Bethlehem to be taken away from the locals and given to the “international community,” this particular part of Jerusalem should apparently belong to France. His spokesperson even clarified this point. Israeli Police stated that Macron’s team later apologized for the incident, and Macron went on to shake the hands of his security detail as they continued their tour of the Old City.

Notwithstanding the apology, one cannot ignore the disturbing pattern. This week’s actions come just a year after Macron outraged the world in announcing his plans to honor Marshal Petain, murderer of the Jews of France and head of the collaborative Vichy government, for his role in World War I. Macron later retracted the plan. Symbolically, the Macron incident occurred as he gathered along with 45 world leaders in Jerusalem to remember the Holocaust — a genocide for which France is still in the early stages of recognizing its previous occupied government’s complicit guilt. For example, a recent study showed that 45% of French millennials are unaware of the occupied French government’s collaboration with the Nazi regime during the Holocaust.

Let us be clear — France is an important ally of both Israel and the United States, and Macron is a friend. He is a courageous fighter against anti-Semitism, including in his repeated proclamation that there is no difference between anti-Zionism and anti Semitism. But friendship requires honesty and France should be told that it is time to take a deep look inside.

France’s repeated episodes of opposition to Jerusalem should not be taken lightly, even if followed by some sort of retraction or apology. Moreover, anti-Semitism in France is rising yet again and trickling up into the mainstream of French society. This was just as it did in the 1890s during the Dreyfus Affair — a stunning case of state-sponsored anti-Semitism spanning multiple levels of French government and society — and just as it did in the 1940s with the Vichy government’s collaboration with the Nazis.

Rather than yell at Israeli Police that things “will not change with me,” it is time for Macron and France to enact radical changes that will put an end to the French government’s stance against Jerusalem. This should not be done to please Jews or Christians. It should be done for the sake of France itself.

Gol Kalev analyzes trends in Zionism, Europe and global affairs. For more of his articles: europeandjerusalem.com.

This article first appeared on the Daily Wire on January 23, 2020

Hijacking the Palestinian cause

European opposition to the Jewish state

Europe should benefit from Herzl’s vision