Two-thousand years of European global domination ended at the outset of World War I. A century later, Europe has yet to come to terms with it.

For 2,000 years, starting with the Greek and Roman empires, Europe dominated the world. Europe exerted unparalleled influence on the global economy, trade and narrative. Europe’s superiority seemed natural, and was expected to last forever.

But at the outset of World War I, two radical changes took place, which a century later are yet to be fully internalized:

1. Europe was forced to give up its overseas colonies and to instead accept the concept of self-determination. Some 2,000 years of European overseas expansion came to a sudden halt, and the opposite process of retreat back to Europe commenced.

2. A swift shift of power occurred from Europe to one of its former colonies – the United States. This was on display in the Paris Peace Conference that marked the end of the war, which was led by an American president, Woodrow Wilson.

The European century of retrenchment began in 1920. But a 100 years later, many of the principles that guided Europe through the past 100 years are eroding.

This includes the principle of self-determination, a key element of president Wilson’s Fourteen Points and the world order of the last 100 years. Europe has been increasingly attempting to subordinate other nations’ sovereignty to international organizations in which Europe wields disproportionate influence. In addition, many Europeans across the continent feel that a European power is increasingly negating their own self-determination. This was a primary theme in a number of elections, such as the 2018 Italian election. The EU impacts the way individual Europeans – many kilometers away from Brussels – farm, work and live. Some compare this to the overreach of European empires of the pre-1920 era.

Overseas, Europe increasingly dents the principle of self-determination by attempting to negate local narratives and impose European ones in their place. For example, we can see this in its support of organizations in the Arab world that encourage secularization, as well as by its aggressive efforts to suppress Palestinian freedom of employment and consumption by promoting a European narrative of barriers between Palestinians and their Jewish neighbors.

While Europe was meant to decolonize and entrench from its centuries-old meddling in others’ domestic matters, Europe seems to do the opposite, using different methods.

Similarly, Europe has failed to come to terms with the shift of power to the United States, which has been providing Europe with security, economic stability and safety for its citizens. European leaders have recently called for the establishment of a European army that, as French President Emmanuel Macron stated, will protect Europe – including from the US. Europe is also home of the International Court of Justice, which has been eying the US’s and Israel’s counter-terrorism measures.

These counter-1920 European behaviors should worry first and foremost Europeans. Europe’s external focus sidesteps its dealing with its mounting challenges at home, such as Europe’s conflict with radical Islam, the debate about the essence of Europeanism, the potential secession of EU member-states, Europe’s battle with home-grown terrorism, rising antisemitism and Islamophobia, as well as the long list of unresolved dormant intra-European conflicts that are temporarily shoved under the European rug.

A preemptive peace conference can bring Europe into 21st-century realities, and right-size it. It could chart the road for a forward-looking Europe of the 2020s, as opposed to a Europe that clings to pre-1914 illusionary vision of itself that still dominates the world.
This is not merely a theoretical matter. Examining the recurring cycle of European history unveils a frightening danger: In every century an unexpected intra-European war breaks out, which is then followed by a set of treaties or political arrangements that provide the perception of long-lasting peace. Then circumstances change, making those arrangements no longer relevant. Then another war breaks out unexpectedly, and then another set of treaties and arrangements are made…

The 1815 Congress of Vienna was able to keep the relative peace in Europe for a full century, but by 1914, circumstances that were present in 1815 were less relevant. Consequently, Europe rapidly plunged into unexpected war. Today as well, 100 years since the 1919-1920 Paris Peace Conference, changing European circumstances make the principles that guided the 20th century less relevant.

There are numerous challenges to an idea of a preventive peace conference, including that it is hard to set principles without clear winners determining whose principles should be adopted. Also, a preemptive peace conference could itself be dangerous, as it would resurface surpassed sentiments and dormant claims. Various arrangements made at the outset of World War I remain today safely shoved under the European rug, but once “everything is on the table” those could resurface in dangerous intensity.

The difficulty and dangers associated with a bombastic Paris- or Vienna-like peace conference can be mitigated by reversing the order of peace-making, starting with easier issues to solve and projecting principles upwards towards other aspects of the renewed Europe. One such solvable issue is Europe’s disruptive intervention in Israeli-Palestinian affairs.

The aftermath of World War I produced a relatively simple reality in the Middle East, built upon president Wilson’s principle of self-determination, and supported by Arabs and Jews alike: the establishment of a Jewish homeland in Palestine, next to a Hashemite Arab kingdom in Syria. The Hashemite Emir Faisal and Zionist leader Chaim Weizmann lobbied to formalize such an arrangement jointly.

But the prospect of a peaceful Middle East was quickly shattered by Europe: France invaded Syria, leading to a debilitating sequence of events. Faisal was overthrown, ending the brief period of Arab independence. The British gave Iraq to the Hashemites as compensation, and later carved out Palestine and gave the Hashemites the eastern portion of it as well. The French invasion also triggered the first casualties of what later became known as the Israeli-Palestinian conflict, as French-Arab warfare leaked to the Jewish village of Tel Hai.

SADLY, THE debilitating European intervention that begun a century ago continues today in full force. It is not only reflected in Europe’s massive efforts to sabotage Palestinian employment and mentorship by Jewish-owned businesses, it is also reflected in Europe’s funding of NGOs that openly incite Arabs against Israel, as well as in Europe’s aggressive promotion of Palestinian victimhood and refugee-perpetuation. European actions systematically suppress the creative and entrepreneurial energies embedded in Palestinian society, and curtail its growth. Europe is engaging in a cultural occupation of Palestine.

Europe has a golden opportunity to advance peace simply by getting out. A prelude to a European peace conference should be charting a roadmap for Europe’s disengagement from its century-old disruptive intervention in Israeli-Palestinian affairs. This will go a long way to help Palestinians and Israelis alike, but the greatest beneficiaries of such disengagement would be Europeans themselves.

European cultural occupation of Palestine is corrupting Europe. It elevates the false sense of moral superiority and European supremacism, including in the notion that Europe knows better than the Palestinians what is good for Palestinians (for example, in Europe’s determining that Palestinians are better off getting fired from SodaStream than from being employed by Jews, and hence aggressively lobbying to relocate the factory to central Israel).

Europe’s intervention is corrupting Europe in many other ways, including by adopting detached principles that go against core European sentiments, such as in European countries’ support or abstention on UNESCO resolutions implying that Jerusalem has no Christian or Jewish history.

Europe’s disengagement requires a 180-degree mental shift. Such a shift can only be accomplished in a grandiose manner, as in a prelude to a European peace conference. Addressing an achievable and relatively simple task of disengaging from Israeli-Palestinian affairs could serve as the “case study” that would jump-start a bigger European peace conference. It will inject honesty and truths that can then be deployed to more complicated topics at hand, as well as demonstrate that Europe can indeed abandon its old falsehoods.

No doubt, this and other aspects of a preemptive European peace conference require an enormous amount of European courage. Conditions are ripe for Europe to display this courage: The European Project generated a sense of a shared European destiny, even by Euroskeptics; the European Union provides a common platform; the 70 years of peace and prosperity created a confidence bandwidth; the wakeup calls of Brexit and immigration led to rising realization that the future of Europe should indeed be on the table.
This could all be translated into the honest, forward-looking mindset necessary for a preemptive peace conference, including the recognition that European global domination is not coming back. A peace conference can provide Europe with a golden ladder to descent from its hollow pedestal of pride – itself a contributor to previous European wars.

The 21st century could indeed be the European century, but to do so, Europe must do something daring. Like the 1815 Congress of Vienna and the 1919 Paris Peace Conference, a 2020s peace conference can turn Europe’s changing realities into tools for charting its road for the next 100 years of peace, this time in an amicable and inclusive manner – and before it is too late.

The writer analyzes trends in Zionism, Europe and global affairs. He is a board member of the America-Israel Friendship League and chairman of the AIFL think tank. For more of his analysis visit Europeandjerusalem.com.

Hijacking the Palestinian cause

European opposition to the Jewish state

Europe should benefit from Herzl’s vision 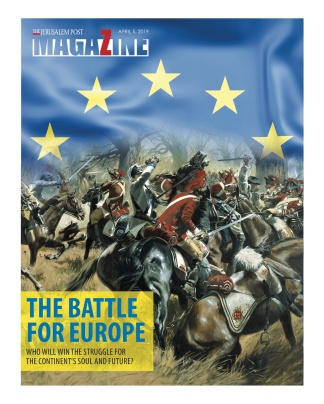 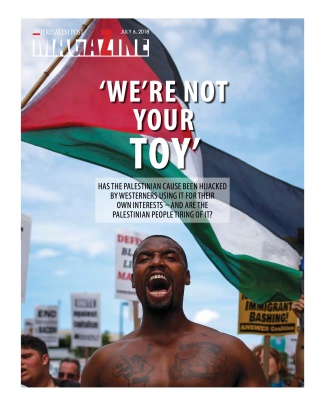 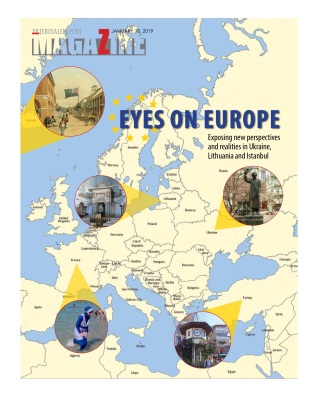 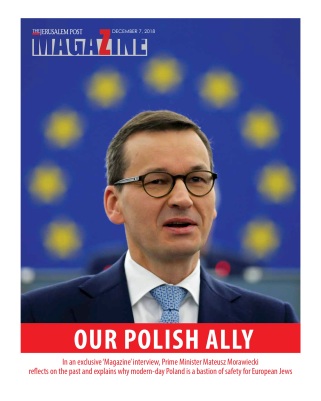 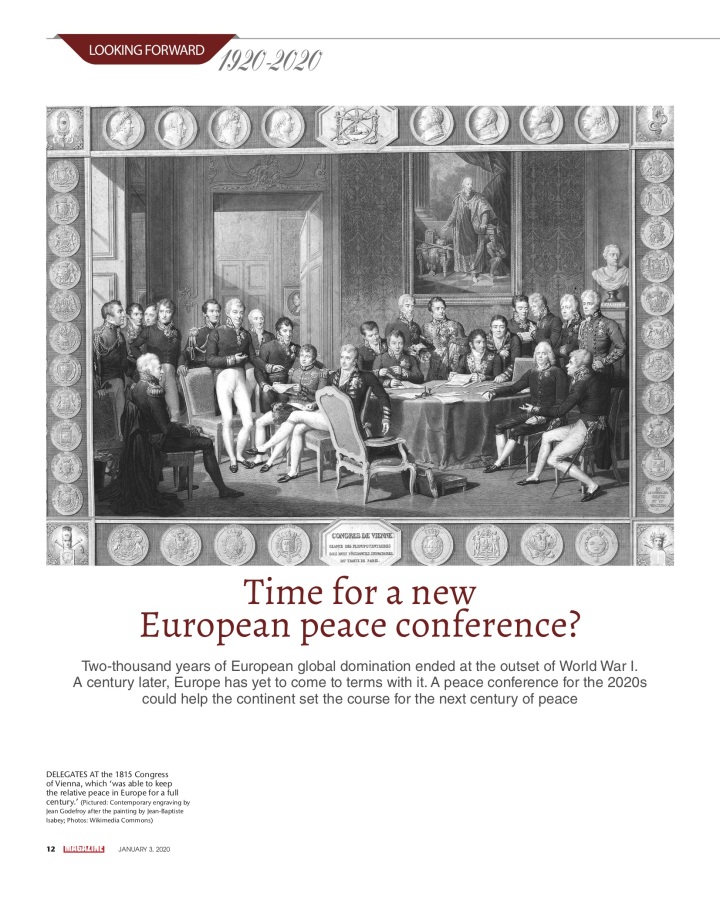