The American Jewish community leader and Jerusalem Foundation board member shares with Gol Kalev his views on the capital, anti-Semitism and the US-Israel relationship. 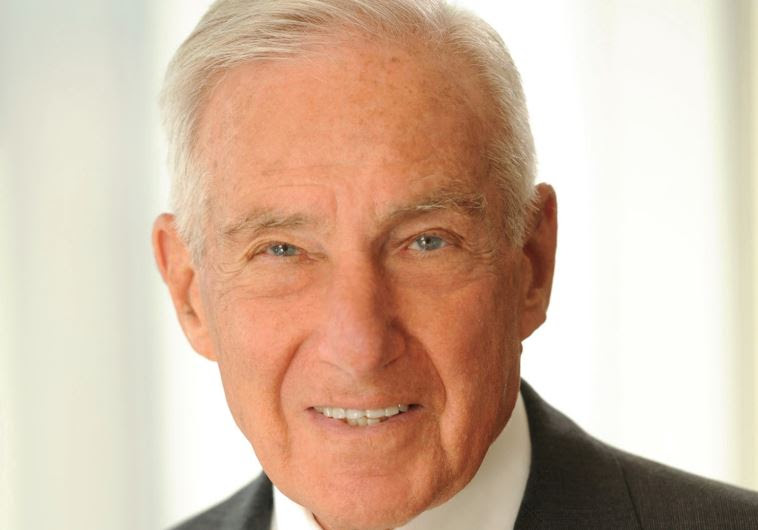 Not a lot of people can say “I have been doing this for 50 years,” but in Kenneth Bialkin’s case it is true across a broad spectrum of activities in American business, political, community and Jewish leadership.

Bialkin is a partner in the Skadden, Arps law firm, former board member of Citigroup, and a close confidant of some of the leading figures in corporate America. He advised and tailored some of the notable mergers that have shaped the American financial industry.

Nonetheless, much of his energies and efforts have long been directed to benefit the Jewish people.

Among his many roles, Bialkin has served as chairman of the Anti-Defamation League, the Conference of Presidents of Major American Jewish Organizations and, for the past two decades, the America-Israel Friendship League (for full disclosure, the writer is a board member of the AIFL).

What people may not know about Bialkin is that much of his Jewish involvement can be traced to Jerusalem.

“I was a good friend of Teddy Kollek,” Bialkin reflects. “In 1966 when he was only mayor of west Jerusalem, he organized the Jerusalem Foundation in New York and asked me to be on the board.

I have been on the board ever since.”

In the 50 years that followed, a lot has happened in Jerusalem.

Bialkin was a firsthand observer and often a participant in much of that. He not only remained engaged with the Jerusalem Foundation for the past half a century, but he acts as its active vice chairman.

With such experience, he has a daring vision for Jerusalem.

“Jerusalem should be recognized as a world-class international city. It should be viewed along the lines of other cities that stand for their nationality: Paris [for France], Copenhagen [for Denmark], Tokyo [for Japan].

Jerusalem is the heart and sole of Jewish identity, the place Jews look to for inspiration.”

Bialkin elaborates on his vision: “Jerusalem should be a destination city, a city that people go to for various reasons. As of now, people come to Jerusalem primarily to visit the origins of major religions, but there should be more.”

He has ideas on what could turn Jerusalem into such a worldclass city: “To become such a destination city, Jerusalem should be a place where the finest orchestras play. It should have cultural attractions comparable to New York and London.”

Bialkin, a trustee of Carnegie Hall and a leading figure in the music circles in New York, is aware that such a task will not be easy.

“Jerusalem is a poor city. Allocating to such a project would be challenging. The success is of course a function of funding, but it is also a function of politics and policies.”

He believes that demand for such concert-hall performances needs to come from outside: “At the end of the day you need to sell tickets; you need to have an audience.

Unless people sit at the right price, it will not work. Therefore, in order for there to be a worldclass concert hall, Jerusalem must be a destination city.”

Notwithstanding the difficulties, Bialkin believes such an undertaking is possible, and points to an example: “Look at the enlarged and improved zoo in Jerusalem. It is now a world-class destination.”

He discusses the idea of the concert hall with the mayor as well as with his colleagues at the Jerusalem Foundation. “There is receptivity and maybe even enthusiasm,” he says. Equally important, he raised it with his circles in the United States: “I discussed it with leading musical figures, with a few potential funders. There are conversations, but there is a long road ahead.”

The overall environment toward the Jewish world is a topic Bialkin spends time and effort on, in particular monitoring and opining on anti-Semitism: “Anti-Semitism is alive and well. Tragically, it is thriving all over the world. It is embedded in the history and culture of countries, people and families.”

He acknowledges that anti-Semitism exists in America as well, but downplays its significance: “Anti-Semitism is universally disapproved by every group in the country.”

Moreover, he puts such anti-Semitism in context: “The freedom we have in America to personally like or dislike anybody is absolute. We have that privilege.

You can say you do not like Roman Catholics because there is too much connection to the pope. Same with Jews – if you want to say you hate Jews, you have a right to do that, and we have a right to ridicule you for it.

It is a free society, but there is no right to harm or disturb the rights of Jews.”

In that regard, Bialkin is in tune with the notion that Israel-bashing is a new outlet of Jew-hatred: “I thoroughly subscribe to that,” he says. “Look at the behavior of countries, of positions taken by governments, by the United Nations and other organizations.

One cannot escape explaining such behavior other than by assigning latent anti-Semitism embedded in those societies.”

Like many inside and outside the Jewish community, he is particularly disturbed by the European Union decision to single out Israel and mandate the labeling of products made by Jews in the West Bank. He has been monitoring the behavior of the European Union and European Commission.

“I think the EU is the worst,” he says. “They are harmful because they have nobody to control them. The European Union is one of the most disturbing examples of organized anti-Semitism.”

But he points to a wider phenomenon: “Look at what happens year after year in the United Nations and other institutions: the same resolutions against Israel. Israel is simply a hated country.”

Born in 1929, Bialkin grew up in America while the Nazi anti-Semitic narrative was building up in Europe. He was a teenager when this narrative was translated into the horrors of the Holocaust. He is fully aware of the potential dangerous consequences of hate, but he is not as alarmed by the current conditions.

“In America, outspoken anti-Semitism, including Israel- bashing, is widely considered poor manners. Nobody wants to be seen engaging in that, no matter what their private views are.

The public attitude of nearly every respectable group, newspaper and organization is to deplore anti-Semitism.”

But when it comes to Europe, where the horrors occurred a mere 70 years ago, Bialkin believes the circumstances are different: “Europe is Europe. It is not just limited to one country or another.

It exists in France, Germany, England and virtually everywhere.

England, for example, has a long embedded anti-Semitic attitude. Some in the country hate Jews, and a subset of those do not hesitate to say so.”

So is the situation in Europe today alarming? “I am not discouraged,” he says.

“We just need to learn to live with those things and fight back.

These are prices we pay for freedom.”

Advocating a containment strategy toward anti-Semitism, recognizing that totally defeating it is not feasible, he has a clear view on what to do about it: “When we see anti-Semitism, we must identify it and call it for what it is.”

He maintains things are different now than they were when he grew up. “The consequences of today’s anti-Semitism are not the same as it was back then. Things changed.”

Drawing a sharp line between attitudes toward Israel and Jews in Europe and such attitudes in the United States, he sees them in the context of the broader question of the US-Israel relationship. He maintains that the relationship is solid and unshakable: “The US-Israel bilateral relationship stands on several strong pillars. It is not just the personal view of the president and the Congress. There are many points of interaction between Israel and America, and most of those are solid.”

He is optimistic about those pillars of the bilateral relationship: “When it comes to Congress, Israel has never been more supported than it is today. It is as solid as can be.

“The defense relationship is very good, as exemplified by the Iron Dome and other initiatives.

Much of the funds that come from America to Israel is in turn spent in America.

“The intelligence services of Israel and America are very close, even more so with the rise of Islamic terrorism. When it comes to the war on terrorism, Israel and the US are locked at the hip.

Every poll shows that the American people regard Israel extremely highly in their public opinion.”

He acknowledges the issues that have arisen at the leaders’ level: “No doubt that the president is the most important point of contact, but I do not think there is a serious impediment there. Sadly, [Barack] Obama does not like [Benjamin] Netanyahu, but the alliance is firm.”

Bialkin is critical of the president and the secretary of state when it comes to the peace initiative: “The president keeps coming back with Secretary [John] Kerry to put a deal between Israel and the Palestinian Authority. Every smart person who has some knowledge of the situation knows that there is no basis now for that to happen. Who is there to talk to? Who is the Palestinian Authority? What is the nature of their government? The idea that anything can be forced on the parties is just talk.”

When it comes to political support for Israel in the United States, Bialkin is clear: “No doubt, the Evangelicals are the most favorable group in America towards Israel, not the Jews.”

Reflecting on Jewish voting behavior, Bialkin, who is a board member of the Republican Jewish Coalition, points out that, like him, many senior members of the RJC were originally Democrats but switched to the Republican Party.

“If you look at voting patterns, Jewish Democrats basically are followers of the leadership of President Obama. On the Iran deal, most Jewish organizations originally opposed it, but many in the Jewish community went along with a halfhearted endorsement, saying let’s hope it works.”

No doubt, the evolution of the Jewish vote will be closely watched. Greater cultural connectivity to Israel may or may not translate into voting behavior.

But keeping in mind that the Jewish vote is merely 2-3% of the electorate, it is the broad support across America that encourages Bialkin.

As chairman of the America-Israel Friendship League, he believes such broad support for Israel is paramount: “We are not a religious nor a sectarian organization.

The objective of the AIFL is to recognize the commitment to the principles of freedom and democracy that both America and Israel share.”

In line with that, he emphasizes: “In the AIFL, we have a greater impact on non-Jews than we have on Jews. For example, our leadership missions to Israel bring political leaders, educational leaders, press leaders, community leaders. Most of our delegates are not Jewish. They go to Israel for a few days and come back as different persons.”

The writer is a board member of the America-Israel Friendship League and chairman of the AIFL think tank.

Related article: Jerusalem Shuk as Beacon to the World
For more articles by Gol Kalev: Europe and Jerusalem
For comments and inquiries, please email: info@EuropeandJerusalem.com