One of the Jewish nation’s greatest mysteries remains unsolved. To attempt to unravel it, one needs to delve deeper into understanding Herzl and his Zionism. 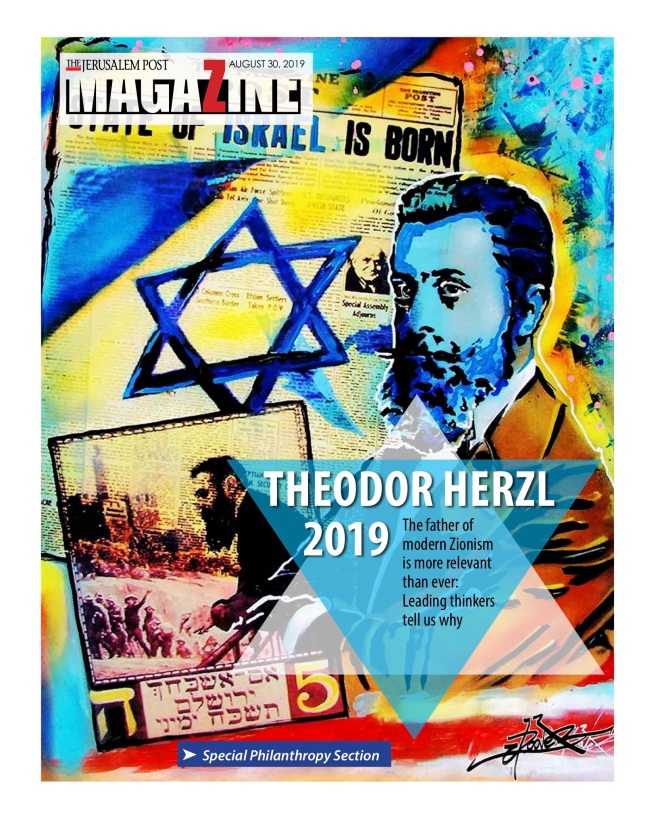 Theodor Herzl stunned the Jewish world. He turned a vision into a political movement that revolutionized Judaism. The establishment of the Jewish state, a mere 50 years after he launched his movement, was just one component of Herzl’s Zionist ideal. But where did all this come from? This question consumed Herzl himself. He wrote in June 1895 to Austria’s Chief Rabbi Moritz Güdemann about his idea: “How did I find it? I do not know.”

Some historians determined that Herzl’s idea was a result of the Alfred Dreyfus trial in December 1894. But this was already 12 years after Herzl wrote in his diary an angry reaction to Eugen Dühring’s antisemitic book The Jewish Question. Reading Dühring, he said, was like a “smack on his head.” It was also more than two years after Herzl wrote his article on French antisemitism, and a full month after Herzl completed his play The New Ghetto, his critical analysis of liberal European Jewish society. In that same August 1895 letter to Rabbi Güdemann, Herzl wrote: “I estimate that for 13 years now this idea is running inside me.”

To apprehend Herzl’s idea and attempt to trace its origin, one needs to grasp Herzl. Core to understanding Herzl is recognizing his Jewish consciousness and unshakable faith. Herzl was certainly not a religious Jew, but just like many secular Israelis today, he was a believer and consumed religious experiences a la carte. (Herzl was arguably an early prototype of the datlaf, the secular Israeli Jew who occasionally observes religious rituals). He demonstrated aspects of his strong faith on various occasions. For example, Herzl described freedom in the Jewish state in a divine context. “Nobody will stand above us, except the Almighty God,” he said. Similarly, he wrote about the journey to the Promised Land that “God, in his inscrutable goodness, has promised us.”

Herzl was so adamant about his Judaism that when he was on the verge of getting his big break as a novice writer, the Jewish editor of the prestigious Deutsche Wochenschrift advised him to resubmit his article with a non-Jewish pen name. Herzl refused, saying he would continue to carry his father’s name and was prepared to withdraw his submission.

It is this unshakable Jewish core that Herzl brought to Zionism. He established Zionism not as a breakaway from Judaism, but as a Jewish ideal. “God would not have preserved our nation for such a long time had there not been another purpose designated for us in the history of mankind,” Herzl wrote in his diary early in his Zionist thinking. He launched the first Zionist Congress with the traditional sheheheyanu blessing, thanking God for bringing the Jewish people to that moment. Herzl clarified to the Zionist Congress that Zionism would not do anything that might hurt religious practices. Indeed, Herzl founded Zionism as a Jewish concept.

Yet, as Herzl’s Zionism broke out from his inner consciousness into a large-scale political movement, there were naturally various views and parties which arose. In the 1935 elections to Zionist institutions more than 30 years after Herzl’s death, an adamantly secular stream led by David Ben-Gurion won. Ben-Gurion and his colleagues consolidated power and held a firm grasp of Zionism for the next 40 years. Hence Israel’s establishment and its formidable years were shaped by a staunchly secular image. This mid-20th century secularization of Zionism as an ideal perhaps contributed to a retroactive over-secularization of Herzl as a man.

Just as Herzl’s Jewish core is often misunderstood, so is his Zionism. Herzl’s Zionism had both practical and philosophical aspects, but the focus tended to the practical side – the establishment of the Jewish state. Not only was Herzl’s Zionism over-securalized, it was also under-ideologized.

‘Our ideal goes further than that’

This is understandable as the practical aspect was so successful. Just as Herzl predicted, 50 years after launching the process in Basel, Switzerland, the Jewish state he dreamed of was established. But here lies a core misunderstanding of Herzl’s Zionism, which Herzl was well-aware of. “There are those people who do not understand us properly and think that the goal of our efforts is to come back to our land,” Herzl said in 1899. “Our ideal goes further than that. Our ideal is the great eternal truth.”

While Herzl expressed frustrations about the misunderstanding of the ideological aspect of Zionism, he spent much of his time developing the practical side that would lead to actionable deeds. Herzl recognized that European Jew-hatred was permanent. No matter how the Jews would evolve, Europeans would funnel their opposition to counter that evolution. This included the Jews’ loyal patriotism to their European countries, something Herzl described as “running to extremes.” Herzl witnessed how Europeans developed philosophies, ideologies and mechanisms to oppose the extreme patriotism of Jews to their European home countries. He concluded that Europeans would never accept the Jews, and was particularly concerned that as Jews became more successful, Europeans would only escalate their opposition to them. (A prediction that arguably turned true in the last decade. As the success of the Jewish state surged, so did the intensity of European opposition to it). Herzl recognized that the Jews will never be safe without their own state. As a result, Herzl created in Zionism a reactionary and practical solution to save the Jews from the imminent dangers of European Jew-hatred.

But Herzl also recognized the organic nature of Jewish nationalism. He viewed Zionism as an infinite ideal that would keep the Jewish nation-religion intact long after the Jewish state would be established. “I believe in honesty that even after we achieve our land, the Land of Israel, it [Zionism] will not stop being an ideal,” He wrote shortly before his death. “Because in Zionism, as I understand it, is embedded not only the aspiration to the Promised Land… but also the aspiration to moral and spiritual completion.” This ideological aspect was Herzl’s deeper meaning of Zionism. The misery of the Jews in Europe was a tool to draw Jews into Zionism – a “propelling force,” as he described it. “Antisemitism turned us into Jews,” he told his friend Max Nordau. “Antisemitism contains the Divine will to make good,” he once argued, “because it forces us together, its pressure unites us, and this unity will make us free.”

One testament of how crucial the ideological aspect of Zionism was to Herzl, relative to the practical one, is expressed through his adamant opposition to Jewish “infiltration” into Palestine. Herzl thought the idea of just coming home in some loosely-organized manner would be futile. He even referred to it as “childish” in an October 1894 article. Moreover, if European antisemitism was what pushed the Jews toward one another and united them, what would unite the Jews once that pressure lifted? Herzl therefore rejected the “practical” idea of simply returning, and instead planted the seeds for a Jewish transformation. Indeed, even before the First Zionist Congress begun, Herzl noted the progress of this nascent transformation. “Already Zionism was able to achieve something magnificent that was considered before impossible: The tight union between the ultra-modern elements of Judaism with the ultra-conservative elements of Judaism… such union is possible only on a national basis.”

Similarly, when Herzl famously stated right after the closing of the First Zionist Congress, “In Basel I founded the Jewish state,” he certainly did not mean the practical aspect. On the contrary, he clarified, “A territory is merely the concrete basis. The state itself, when it possesses a territory, still remains something abstract.” In this abstraction lay the secret to the infinity of Zionism.

Herzl recognized that very few people fully understood this deeper layer of Zionism. Indeed, according to Herzl, only two people understood his idea in a flash: One as a follower, Max Nordau, and one as an adversary, his supervising editor at Neue Freie Presse, Moritz Benedikt.

The outsider is free to see the truth

“He knows absolutely nothing about the Jews,” Russian-born Hovevei Zion leader Menachem Usishkin concluded, after meeting Herzl in May 1896. In fact, Herzl was also an outsider to the Jewish establishment and to its lead thinkers. He did not even hear of Leon Pinsker’s Auto-Emancipation, the 1882 book that inspired so many Jews at the time, while he was developing his own ideas.

As an outsider, Herzl could keep a clear mind to observe nuances. He was not shackled by the burden of being a rabbi, an academic or a Jewish leader. He was not beholden to a business plan, precedent, indoctrinated supervisors, nor to the status quo. Herzl was free. He was free to see his truth. Like the outsider Moses, Herzl saw what enslaved Jews could not see, and he was ready to lead the exodus out of Europe. Just as with Moses, this was not just a physical exodus that would lead to the establishment of the Jewish state, but also a transformative philosophical exodus. “The proximity to Europe is bad,” Herzl wrote, “because in the first 25 years of our existence we need, for our development, some rest from Europe, its wars and social complications.”

Herzl’s being an outsider was paramount to developing Zionism. So much so that when he finally read Pinsker’s Auto-Emancipation days before the scheduled publication of Der Judenstaat (The Jewish State), he said: “It is a good thing that I did not know it or perhaps I would have abandoned my own undertaking.”

Herzl did offer occasional, subtle, carefully-worded mystical speculations about when and how he came up with Zionism. At one point he hinted it had occurred in the realm of his subconscious; at another that it was in a childhood dream. At a different instance, he speculated that it arrived in a bottle of brandy he received from wineries in the Land of Israel. “Perhaps there was hidden the idea of Zionism,” he wrote.

Herzl seemingly chose to address the conundrum of where the idea of Zionism came from at the grand finale to his landmark novel Altneuland (The Old New Land), published in 1902. There, he posed that same question in a different form. Zionism, now manifested in a Jewish state, is described as a “new and happy form of human society.” Herzl concludes the novel by asking, “What created it?” He once again offers various theories, such as necessity and will power, but seems to refute them with a better answer he chose to end his novel with. Herzl recognized that in fiction he could be more daring and have greater liberty to expose his truth, which could be ridiculed if expressed as opinion. Mastering his pen, Herzl knew which ideas to write as actionable deeds, and which dreams to hide behind the protective veil of fiction. And yet, as he said in the epilogue to Altneuland, “Dreams are not so different from deeds as some may think.”

The question of where and how Herzl received his Zionism remains a mystery. Yet, what is clear is that when he arose and proclaimed his Zionist message, it was not a departure from Judaism, it was an enhancement of Judaism. As Herzl stated in his opening speech of the First Zionist Congress: “Zionism is the return to Judaism, even before it is the return to the Land of the Jews.”

The writer analyzes trends in Zionism, Europe and global affairs. He is a board member of the America-Israel Friendship League and chairman of the AIFL think tank. For more of his articles visit: Europeandjerusalem.com

We’re not your toy: Europeans hijacking the Palestinian cause 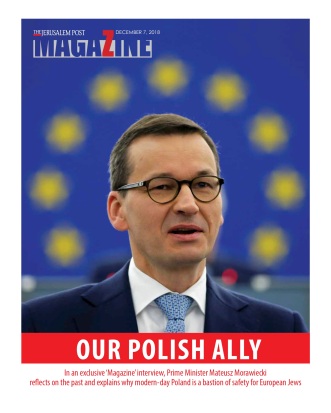 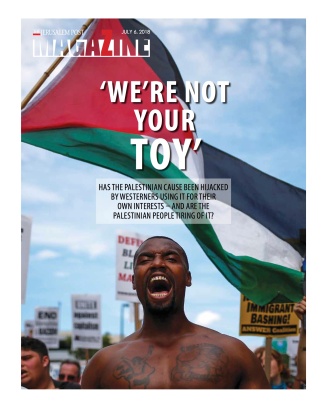 For more articles on Herzl by Gol Kalev: Herzl analysis