Support for Israel and foreign policy based on principles rather than doctrines is at the core of Cruz’s approach, his national security adviser, Victoria Coates, tells ‘Post’. 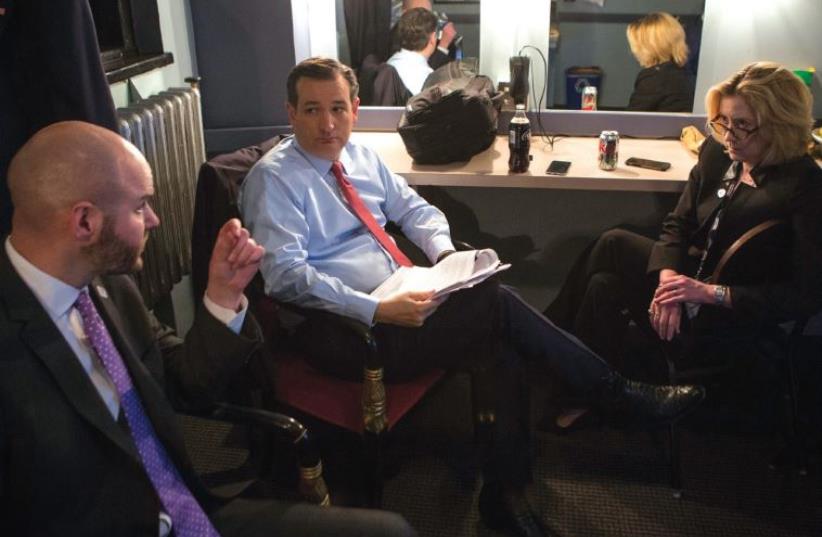 A cultural historian by background, in Coates’s recently published book, David’s Sling: A History of Democracy in Ten Works of Art, she examines intersections between the fine arts and the free systems of government in the Western tradition.

Through her career, she was able to retain her interests in the arts, acting as a consulting curator at the Cleveland Museum of Art and writing for art publications, all while serving in her national security roles. She worked with former defense secretary Donald Rumsfeld, and served as foreign policy adviser to Texas Gov. Rick Perry during his 2012 presidential bid.

While the gathering did not get sought after media attention, it yielded a strong friendship that sprung between Coates and Cruz.

Three years later, Cruz launched an underdog run for a vacant senate seat in Texas. After a surprising win, he asked Coates to be by his side as he assembled his team. Three years after that, he was running for president and she joined the campaign as his senior adviser for national security.

Together, the two share a passionate support for the State of Israel.

“Israel is in the trenches with the United States.” Coates says. “It shares our values, it is both our security partner and economic partner, and is vital to our national security.”

When it comes to crafting a foreign policy strategy, she is careful not to be boxed into frameworks.

“It is not that we intervene everywhere, nor that we do not intervene anywhere. People like to use the framework of doves and hawks. I’d say, we are neither – if anything, we are Owls: The question is what are we getting from the intervention.”

Departing from conventional rhetoric, she explains, “Spreading democracy is not by itself an objective. Sen. Cruz has been very specific – he does not object to using military force if we get something out of it.”

More broadly, she believes that foreign policy doctrines could be confining in a rapidly changing world. Instead, she prefers to rely on foreign policy principles.

She applies this approach to the Israeli- Palestinian conflict and is not beholden to the playbooks of the past.

“We are forcing a context to a negotiation which may not be viable.”

Committing what some in Europe and in the US would call political heresy, Coates explains the campaign’s contrast from standing policy.

“Ted [Cruz] is from Texas, I’m from Pennsylvania. We are practical people. We do not look at this from a romantic lens of solving world problems and aspiring for global peace,” she explains.

“Nothing will make us happier [than] if the Palestinians decide they want to take ownership of their own society and come to the table. But that is not happening and until it changes, we need to be practical.”

She is concerned that over investment in the two-state framework could be damaging.

“The problem is that we can not make incremental progress now. That is inconsistent with the two-state solution,” she says.

One such perceived inconsistency has been Israeli settlement building.

A criticism often leveled at Israel is that building in a Jewish neighborhood in east Jerusalem and the West Bank undermines the prospects of a two-state solution. Coates stresses that their approach diverges from the Obama (and previous) administrations, citing Cruz’s stance that settlements are an “internal Israeli issue.”

“Successive administrations have been looking at the issue of settlements as black and white. The issue is considerably more complicated. It has been our feeling that this is for Israel and the Palestinians to ultimately work out. The intervention by the United States on the topic of settlements has not been helpful,” she continues. “I do not want the Israeli Prime Minister [Benjamin Netanyahu] to tell me where in Philadelphia I can build. We should not be telling Israel where to build either.”

Recognizing the changing dynamics in the Middle East, such as the rise of Islamic State and pending failure of states in the region, she applies the approach of resorting to principles over legacy frameworks to Israel’s security.

She asserts that “2016 is not 1967,” emphasizing a somewhat obvious point often missed in the current diplomatic climate.

“What could have been palatable 10 years ago, may not be palatable now.

More importantly, looking ahead, we do not know what will be in 10 years. In approaching a potential arrangement, you have to assume that what was true yesterday may not be true tomorrow.”

Another matter that has been on hold due to legacy frameworks is the prospect of moving the US Embassy in Israel to Jerusalem.

Cruz repeatedly stated that in his first day in office as president, he will start the process of moving the embassy.

“This is not a symbolic gesture that we just announce. In the past, presidents promised to move the embassy, but did not do so. We have a real opportunity here and that is what we believe in. We want to send a signal that the double- talk that has been playing out over the last 20 years is coming to an end.”

Recognizing that Jerusalem and Israel are under attack not only militarily, but also politically, she is troubled by how fashionable the Boycott, Divestment and Sanctions campaign and Israel- bashing has become.

“BDS is of enormous concern. Sen. Cruz is taking it very seriously and have led a number of initiatives to fight it.”

Stating that “BDS is anti-Semitism plain and simple,” Cruz has been on the forefront of battling what Coates labels “the cottage industry of condemning Israel.”

In choosing the arenas to counter the movement, Coates points to Europe and says that the European Union is “the gateway to BDS.”

She cites Cruz’s leadership in building a bipartisan coalition along with Sen.

Kirsten Gillibrand (D-New York) to protest the EU’s decision to mark products made by Jewish-owned businesses in the West Bank.

Labeling it a de facto boycott of Israel by the European Union, the letter called the effort “unwarranted, dangerous and damning to the prospects of a negotiated solution.”

Coates is concerned with what is happening on college campuses in the US.

While acknowledging that not all can be solved through policy, she points to Cruz’s initiative to stop federal funding to universities that participate in the boycott.

In addition she believes much can be done on the state level, encouraging them to take measures against those who participate in BDS.

As for policy moving forward, she advocates a strategic fight against it.

“I think of the Arab boycott in the 1970s and how we countered it. Then, we made it outright illegal to comply with the Arab boycott. I think we need to apply some of the lessons from it and state clearly: If you boycott Israel, you boycott the United States.”

Hand-in-hand with the attempt to boycott, divest, and sanction the Jewish state, the growing wave of denying Israel’s right to self-defense has proliferated.

When asked about comments by the Swedish Foreign Minister Margot Wallström, calling the shooting by Israeli security forces of terrorists as they stab their victims “executions,” Coates is clear in her condemnation saying that is it is “utterly shocking.”

“If Ted Cruz is president, there will be a different approach from the White House. There will be ramifications. We will not tolerate such statements.”

She links the onslaught on Israel’s right to defend itself to the overall war on terrorism.

“What we are currently doing against ISIS [Islamic State] is not working. Sen. Cruz has called for a robust concentrated air campaign, without targeting civilians. If this is being criticized as being too mean to the terrorists, that’s fine with me.”

On the positive side, she underscores the message that the US brings to the world.

“We are an aspiration nation and a generous nation. Same with Israel. The humanitarian aid Israel gives to the wounded in the Syrian war is heart-wrenching. The projects Israel undertakes such as Red Sea-Dead Sea Canal should serve as inspiration to the entire Middle East.”

As for the historic election unfolding in the US, Coates is proud of the strong show of force displayed.

“In this election, we had candidates for president of all sorts: men, women, Catholics, a Jew, an African American, two Cubans. Unlike in Iran, none of them were preapproved by anybody,” she says.

She is not concerned by the direction the elections have evolved to, nor by the rise of anti-establishment and outside candidates.

“People want to pick a candidate by themselves and rightly so. They no longer are agreeable to having someone being imposed on them,” she says, adding proudly, “What we are seeing in this election is the great strength of the United States of America.”