REPRINTS FROM THE JERUSALEM POST; BY GOL KALEV, OCTOBER 3, 2018

COME ON ride the train: The first locomotive debuts during a test run in mid-January. (photo credit: SYBIL EHRLICH)

September 25 was a special day in Jerusalem. The holiday of Sukkot brought thousands of Israelis to Jerusalem, but something else was making its way up the mountains toward the holy city. The first stage of the electric train connecting Tel Aviv to Jerusalem – from Ben-Gurion Airport to the capital – has opened!

In the works for decades, the train is likely to change the relationship between 110-year-old Tel Aviv and 3,000-year-old Jerusalem. Two cities, an hour drive apart (barring traffic issues) – but with different narratives and perception.

The inauguration of the train marks the fulfillment of yet another element of Theodor Herzl’s dream. The father of Zionism outlined his vision for the Jewish State in his 1902 utopian novel The Old New Land (in Nahum Sokolow’s Hebrew translation “Tel Aviv,” after which the city founded seven years later was named).

In the book, two men, Kingscourt and Löwenberg, visit Palestine and observe its destitute emptiness. They return two decades later once the Jewish State is established, and are stunned by its accomplishments.

“All the Devils!” shouts Kingscourt. “What’s that?” He points to a large iron car running along the tops of the palms.

“An electric overhead train,” explains Littwak. “You must have seen them in Europe.”

Like Kingscourt, drivers on Route 1 connecting Tel Aviv and Jerusalem must have been impressed by iron cars suddenly running on bridges near them, disappearing into mountains and emerging from tunnels.
From the train’s window, the view is not only of beauty, but also of revival: fields planted, neighborhoods constructed, roads built. It is indeed the view of the fulfillment of Herzl’s utopia. From the second level of the train, one can see the shoreline neighborhoods on the left side and far into the Samarian mountains on the right.

On its first day, still in experimental phase, the outer cars were nearly empty. An ultra-Orthodox family was enjoying the landscape; an American was working on his laptop plugged into electricity; a young religious couple was chatting continuously and gazing through the windows.

A switch of trains is necessary at Ben-Gurion airport until the electrification is completed to Tel Aviv. This lengthens the anticipated 28-minute journey to 45 minutes – still shorter and more predictable than by car or bus.

With the new train line, Jerusalem will be different, although it is yet to be perceived how. Some believe the train will drive the two cities further apart – that young seculars living in Jerusalem due to work or study will now move to Tel Aviv and commute. This would make Jerusalem more religious and older. Others believe that the train will soften the differences in narrative and experience, that it will enable Tel Avians to travel frequently to the holy city and vice versa. This could essentially unite the two metropolis cities into some sort of JerusAviv.

One thing is clear: with the newfound accessibility, some misperceptions of Jerusalem are likely to be shattered. Many Israelis view Jerusalem as a city of conflict, poverty and divisiveness. This is out of sync with contemporary realities. Jerusalem is the symbol of optimism. Israelis ascending to Jerusalem by train will be able to see Arabs interacting with Jews in the market, nuns next to rabbis, Orthodox adherents alongside their secular brethren. Jerusalem is about dialogue, appreciation and gratitude. If Zionism is light to Judaism, Jerusalem is light to Israelis.

Misperceptions of Jerusalem are not limited to just Israelis. As Arab and Jewish residents of Jerusalem were looking forward to the arrival of the fast train, Europeans found reasons to delay it. With small portions of the tracks crossing the invisible 1949 cease-fire line, European leaders put pressure on European companies participating in the construction, who eventually had to withdraw. While this satisfied European obsessions, it forced Arabs and Jews alike to wait longer.

In Herzl’s opus, Kingscourt and Löwenberg take note: “When they alighted from their train, they noticed a train on the next track marked for Beirut.”

The train to Beirut is not yet available; this element in Herzl’s vision is yet to be fulfilled. But as the electric line is completed to Tel Aviv, there is renewed hope that the people of the Middle East will be able to overcome external intervention from Europe, Iran and others and enjoy the benefits that Herzl envisioned, as it was explained to Kingscourt:

“Trains run now to Damascus, Jerusalem and Bagdad. Since the railroad bridge over the Bosporus was finished, it is possible to travel directly, without change of cars, from Saint Petersburg or Odessa, from Berlin or Vienna, from Amsterdam, Calais, Paris, Madrid or Lisbon to Jerusalem.”

Indeed, the new train might be able to help spread the light emanating from Jerusalem – not just to Tel Aviv, but to the rest of the world. 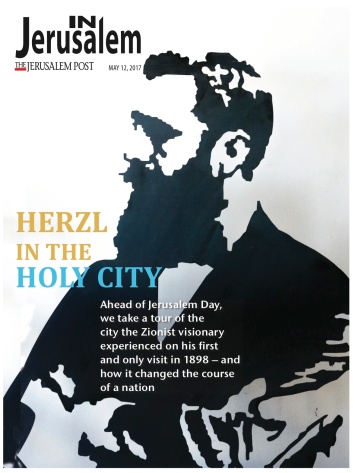