Reprints from the Jerusalem Post.  By Gol Kalev, December 7, 2017

This week marks the centennial of the start of British rule of Jerusalem.

In the four centuries leading to World War I, it was ruled by the Ottoman Turks. But in 1914, when Turkey entered the war on the side of Germany, things were about to change.

After conquering Beersheba and then Gaza in November 1917, British general Edmund Allenby was advancing north toward Jerusalem.

The Turks made an earlier decision to concentrate their efforts on defending Medina. The sacred Muslim city was under a prolonged siege, but the Turks refused to retreat. Focusing on Medina, however, compromised the Turks’ ability to protect Jerusalem.

December 8 was a tense Shabbat for Jews in Jerusalem. Aware that the British were at the outskirts of the city and cognizant of brutal Turkish actions in Armenia, Jews were nervous. As Shabbat ended, they began preparing for Hanukka, the holiday marking the miraculous emancipation of Jerusalem from its first European suitor, the Greeks.

Most of them were unaware that as they were taking out their hanukkiot, the Turks were preparing to withdraw from Jerusalem. Overnight and into dawn, the entire Turkish force in Jerusalem abandoned the city – most of them heading east toward Jericho.

Among the last to leave was the Turkish governor. Right before departing, he gave the mayor of Jerusalem a letter of surrender to be delivered to the British. He then cabled headquarters in Damascus: “The enemy is in front of us… adieu from Jerusalem.”

As Turkish carriage convoys were heading east, the mayor and a group of residents began walking west by foot, holding an improvised white flag and the surrender letter as they headed toward the British in the brisk early morning cold.

The mayor stumbled into a British cook and a sergeant who were searching for food and matches; they refused to accept his surrender. He then came across two British artillery officers, who also refused to accept the surrender but agreed to pose for a photo.

While the mayor was desperately trying to find someone to surrender to, Allenby was at his tent outside Jerusalem, welcoming an important guest. T.E. Lawrence, known as Lawrence of Arabia, flew from Aqaba for a few hours to report about his Arab men’s failure to destroy the Yarmuk bridge, crucial to the Turkish supply line.

The failure led to strengthening of the Turkish position in Medina. Worse, it put Lawrence’s life project – recruiting Beduin to the British war effort – in severe jeopardy.

Expecting to be reprimanded, Lawrence wrote about his meeting with Allenby.

“While I was still with him, word came from [Maj.-Gen. Philip] Chetwode that Jerusalem had fallen.” Instead of being scolded, Lawrence was invited to stay for two more days and witness the historic British march into Jerusalem.

Preparation for the grand entry begun to take shape, as Lawrence put it, “in the official manner which the catholic imagination of Mark Sykes had devised,” referring to the influential British diplomat.

On the morning of December 11, Allenby left his tent and headed toward the holy city.

He wrote to his wife, “It was a brilliant day; hoar frost here, in the early a.m, and then iced sunshine, with no wind.”

Allenby rode his horse eastward on Jaffa Road to the cheers of the city’s residents.

Just 20 years prior, someone else was riding the exact same road, in the same direction, to similar cheers. That was Allenby’s arch-rival: German Kaiser Wilhelm II.

Back then, in October 1878, when the kaiser passed through the Jewish gate (today’s Davidka Square), an Austrian Jewish journalist observed the procession from a distance, from the nearby Kaminitz Hotel. Theodor Herzl, the founder of political Zionism, came to Jerusalem hoping to meet the kaiser, who was to lobby the sultan to grant the Jews a chartered company in Palestine under German protection.

The kaiser then proceeded to the Old City and entered it through a breach in the Holy City walls that was carved in his honor. The breach, right near Jaffa Gate, was large enough to allow the kaiser to enter by carriage.

A few days after the kaiser entered by carriage, Herzl entered by foot; 20 years later, Gen. Allenby decided to do the same.

Walking through Jaffa Gate, Allenby marched toward the Tower of David, where the surrender ceremony took place. Lawrence wrote to his parents: “It was impressive in its way – no show, but an accompanist of machine gun & anti-aircraft fire, with airplanes circling over us continuously.”

Stating that the ceremony gave him new determination, Lawrence was reinvigorated to persevere with the controversial Arab revolt he helped instigate, in spite of its recent failures. The conquest of Jerusalem was so meaningful, that he declared, “For me this was the supreme moment of the war.”

Jewish eyewitnesses said that when they saw Allenby standing on the stairs of the Tower of David, they felt as if the Messiah had arrived. “We knew we’re redeemed,” one of them said.

Prime minster David Lloyd George reflected, “The moral effect of the victory was tremendously important. It cheered our own people at a critical time, when defeatist elements were making their influence felt among us.”

The bells at Westminster Abbey rang for the first time in three years; the same with church bells throughout Europe. Christians around the world were ecstatic. Newspapers described this as a completion of the work of Richard the Lionheart and as the liberation of Christian Jerusalem from 800 years of Muslim occupation. Allenby himself reportedly commented: “Only now has the Crusade ended.”

But the arrival of Europeans at the gates of Jerusalem should have also worried the Jews. Dore Gold, president of the Jerusalem Center for Public Affairs, notes a recurrence every time Europeans control Jerusalem.

This time, though, things were meant to be different with the Europeans. Just a month prior to Allenby entering Jerusalem, the British government issued the Balfour Declaration, viewing with favor the establishment of a Jewish homeland in Palestine. That declaration was supported by the Arab Emir Faisal, as well as by European powers. Similar declarations were prepared by Germany, Japan and other countries.

Indeed, Herzl’s work came to fruition not by the German kaiser breaking through the walls in arrogance, but by Allenby, 20 years later, walking into Jerusalem in reverence.

Allenby took time to admire the sights of Jerusalem and of the Holy Land that were unveiled in front of him. Then, fueled with inspiration, he was ready to proceed toward Damascus.

But mounting trouble on the European front called for re-evaluation. Allenby had to scrap his plans for the time being and send the troops back to Europe.

In the meanwhile, the Zionists quickly organized. Within days of Allenby entering Jerusalem, a Zionist delegation was being formed to begin implementing the Balfour Declaration, including engaging with the Arabs and coordinating with local Jews. Led by Chaim Weizmann, the delegation had the blessing of prime minster Lloyd George, the Foreign Office, British military commanders and even Allenby himself. The Jewish homeland seemed at hand.

But the Zionist enthusiasm was premature.

Just five days after the surrender ceremony, Allenby received a letter from headquarters in Cairo. It was from Gen. Reginald Wingate, known as Wingate of Sudan.

“Clayton’s and Lawrence’s accounts of the entry into Jerusalem were very thrilling… though Mark Sykes is a bit carried away with the ‘exuberance of his own verbosity’ in regard to Zionism and unless he goes a bit slower, he may quite intentionally upset the applecart.”

Wingate and others in the British military begun taking measures to chill the Zionist exuberance and to sway British policy away from the declaration the British government had just issued.

The immediate backtracking from the declaration was not just a minority view in fringe elements of the military; it went all the way to the top. Lloyd George’s great-granddaughter, the renowned historian Margaret MacMillan, reflected to The Jerusalem Post: “The British thought that they would be there for generations to come. They thought it would just stay part of their empire.”

So the ceremony at the footsteps of the Tower of David did not symbolize the cornerstone of a Jewish homeland, but of expansion of the British Empire and of European colonialism.

Indeed, when Allenby arrived at the gates of Jerusalem, he was escorted by representatives from numerous European and Western countries who came to participate in the festivities and to claim Jerusalem.

Allenby had since left Jerusalem and the British military eventually withdrew from Palestine, but arguably some of the Europeans have refused to depart – merely switching from uniforms to suits.

A multibillion-dollar industry has emerged from European meddling in Israeli-Palestinian affairs. That is done through the EU, various UN agencies, multinational organizations and NGOs. While for the most part well-intentioned, such intervention has turned into a primary obstacle for peace between Arabs and Jews.

Europeans build artificial barriers between Palestinian and Israeli societies, such as in their relentless efforts to intercept Jewish-owned businesses that could employ Palestinians. Europeans also fund organizations that openly incite Palestinians against Israelis. This is symptomatic of a paternalistic and condescending attitude some Europeans in Jerusalem have towards Palestinians.

Gold points to similar European attitudes that occurred at another time Arabs wanted to reconcile with Israel: “When [Egyptian president] Anwar Sadat decided to visit Jerusalem in 1977, there was a whole community of expatriates from the West living in Cairo that were beside themselves.”

But Europeans today can apply a crucial lesson of the war that launched their intervention: know when it is time to withdraw.

The Turks lost Jerusalem and then their entire empire, in part because they refused to retreat from Medina. The British, recognizing rising troubles in Europe, retrenched and saved Europe.

Today, it might be time to save Europe once again. This is due to its mounting troubles: terrorism, institutional Islamophobia, growing human rights violations on the continent, popular outrage against immigrants, suppression of minorities seeking self-determination and fear that further weakening of the EU could open doors for various groups seeking greater autonomy and independence.

Investing European taxpayer money to promote boycotts, disruption and despair overseas will not alleviate any of Europe’s woes at home – nor does it help Palestinians or advance peace.

For a change in course to happen, Europeans need to engage in an honest and brave reassessment of their century-old involvement.

Lawrence of Arabia, who was enthusiastic about instigating the Arab revolt during the war years, spent his postwar years engaging in such tough reassessment. He wrote to a friend, “Did I tell you that I consider what I did in Arabia morally indefensible?”

Is it time for Europeans to recognize that notwithstanding their positive contributions, what they are doing in Palestine might turn out to be the same? Gold is not optimistic. Drawing from his experience as Israeli ambassador to the UN and adviser to Prime Minister Benjamin Netanyahu, he shares, “I have met former European officials who believe they know what is best for Middle Easterners and they refuse to accept that Israel and the Arabs have increasingly a great deal in common.”

Gold believes that such attitude cannot be changed easily.

“They refuse to accept it because they do not want to accept it. It defines the moral conclusions which they reached on their own.”

100 years since entering Jerusalem, it might be time for Europeans to finally go back home to Europe. Then, they can return as civilians, walk through the gates of Jerusalem, and like Allenby and Herzl, unveil their eyes and see its wonders. 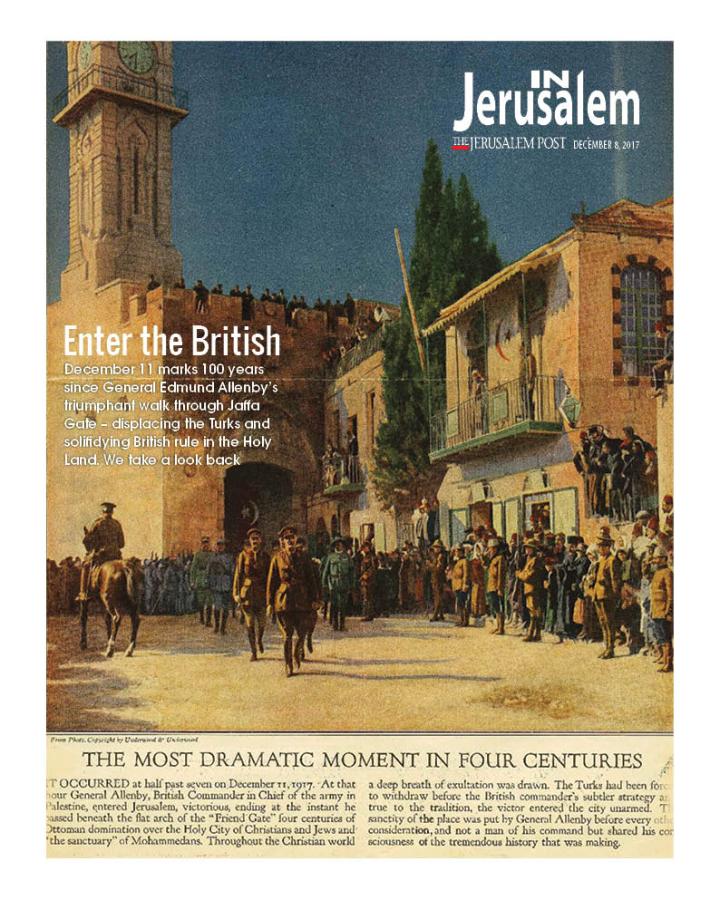